Not Bad for an American

Exactly fifteen years ago I did a semester abroad in Nice, France. It was, to this day, one of the most personally developmental experiences of my life. I had arrived into the country without a place to live or anybody at the Université de Nice – Sophia Antipolis knowing who I was or why I was there. The study abroad coordinator for the company that arranged my exchange had apparently quit right before I got there and hadn’t bothered to tell anyone I was coming.

I will forever be grateful to my friend Julie and her lovely mother Evelyne who lived in Nice and took me in for the first two weeks while I figured out how to get the university to acknowledge me, matriculate me, and give me a dorm room. It was a test of determination and language skills. Armed with several semesters of college French, I was flung into negotiations with French bureaucratie and was told “ce n’est pas possible” time after time. When I finally got installée, I got lumped in with the Erasmus (European Union) exchange students, which I was ok with because they were a fun and boisterous group and France seemed to recognize them as valid exchange students.

As I moved past the first month of uphill bureaucratic battles and began to establish myself and my voice among my new entourage, I noticed a common sentiment that I was “not bad for an American”. While the consensus was meant as a compliment, the obvious bash toward my country was noted and pondered. What makes Americans so unappealing to so much of the rest of the world? Two of my main takeaways that I have contemplated over the years:

My desire to help change the world’s impressions of Americans, and vice versa, was one of the main drives of creating Island Immersion. Diving into new places and meeting our host locations on their terms – doing our best to integrate into their culture and language and environment – can help foster understanding, compassion, and humanity on all sides. Like the idea of traveling like this in a collective of openminded humans? You may be a good fit for one of Island Immersion’s upcoming trips. Get in touch to talk travel, languages, and connections.

And for a laugh (and maybe some more food for thought), here’s a an email written to my friends and family from a younger, feistier past version of myself negotiating my sense of identity and nationalism in Nice, France, in Fall 2005:

“Not bad for an American.”

I’ve heard this sweet little compliment about… 4 times this week that I can think of. First time, during the weekend. We all went out to some pub/club in the Old Town for some drinks and dancing. After a round or two, we hit the dance floor and were having a great time. At some point in the evening somebody (one of the other foreign exchange students, I think from Germany) said to me, “Hey, you dance well for an American!” Hmm…charming. Thanks. Second time was Monday, I believe. I made dinner for my friends since I’m pretty much always eating all their food. Some delicious chicken curry was on the menu, and it was a total hit. I was duly praised: “This is SO good. You don’t cook poorly at all for an American.” What grateful friends I have! Third time, also that evening. Some girls came into the kitchen as we were eating, and we started talking, and one girl noted, “Wow, you speak great French. It’s really good for an American.” Fourth time, maybe a day or two ago, I was reusing a piece of aluminum foil to recover my food, and my friend asked, “What are you doing? Do you want some new foil?” And I said, “No way. Reduce, reuse, recycle.” His response, “Huh. Not a bad motto for an American.”

All of these people who made these little “not bad for an American” comments are European, have never been to America, don’t know any Americans except for me, and the worst part is… these comments were supposed to be taken as COMPLIMENTS. Most of the people I’ve met thus far here in Europe perceive Americans to be… sub-par to say the least. I’m glad that I’m here now and friends with them, so that I can show them we’re not all the uncoordinated, sloppy wasters they think we are. And since I know these people who made the comments and I like them, I could laugh about it. But if a stranger or somebody I don’t like had said anything like that to me, I’d have a much worse reaction. In fact, I did –

— toward my French teacher. I have a French as a Second Language course in the evenings: Tuesdays and Thursdays with a lovely lady from Paris, and Mondays and Wednesdays with a jerkface from French Canada. One fateful Wednesday, Monsieur Jerkface gave us an article entitled Réligion aux Etats-Unis (religion in the United States), which basically said that all Americans are Christian, evangelists, fundamentalists, against homosexuality, against Islam, and are all in agreement with the Bush administration. I feel strong ties to my Christian upbringing, but I’m not the bible-thumping evangelist that this article was making me out to be, or a fundamentalist, certainly not against homosexuality or Islam, and couldn’t be a Bush follower considering I ran against him in the last election. (For those of you who didn’t know, my 2004 campaign was “Kath for Queen of America” but things sort of fell through. But look out for a new and improved campaign in 2008. It’s gonna be big.) But in all seriousness, this French article about religion in the U.S. made me livid. So, during our half hour of writing response time to a different article he had given us, I seized my opportunity to pretty much rip him apart as a teacher. I wrote that it was irresponsible of him to give such one-sided articles to a group of students, especially since there is an American in the class. Thinking about it now, I’m actually glad I’m in the class because I can’t even imagine if he was giving these articles to my peers and there not being anyone there to counter the arguments. 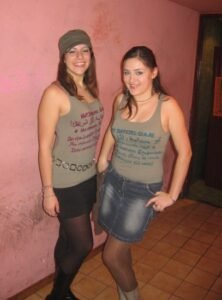 Moral of the story is, if you can, TRAVEL TRAVEL TRAVEL, anywhere, and meet new people and start breaking these stereotypes and TEACH the world that America is the home of some incredible people. Whether you’re Christian, Jewish, Muslim, Hindu, atheist, gay, bi, straight, whether you voted for Bush, Kerry, or Kath for Queen of America (p.s. I’m turning it into the Pink House when I’m elected into office), you’re all intelligent, creative, insightful people and you can dance, cook, speak languages, and reduce, reuse, and recycle just as well as anybody else from any other country in this whole wide world. So let’s start proving it.

(My best friend from Erasmus, Klaudia, from Poland (right), and myself (left) in 2005 in our infamous homemade shirts reading “Not interested, go away” in 11 different languages.) 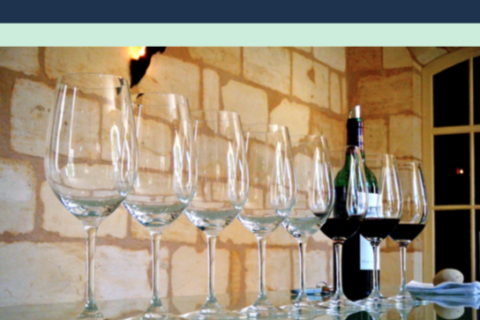